“Our employees, medical staff and volunteers are very special and it truly is an honor and privilege to be able to serve them as CMH’s next CEO/executive director.””
Michael Calhoun
By BH-FP news staff

According to a CMH news release, Calhoun will succeed Gary Fulbright, current CMH and CMH Foundation CEO and executive director, who is retiring Friday, Dec. 31.

"I have been a part of CMH for many years and I wholeheartedly believe in the mission, vision and core values of the organization,” Calhoun said in the release. “Our employees, medical staff and volunteers are very special and it truly is an honor and privilege to be able to serve them as CMH’s next CEO/executive director.”

The release stated Beverly Derrickson will continue as chief operating officer for CMH Foundation and will also be the special projects coordinator for the hospital.

The chief operating officer for the hospital will be named at a later date, the release stated.

"We are extremely excited to announce Michael Calhoun as the next leader for CMH and CMH Foundation. We conducted a thorough local and national search and had several excellent candidates," Pat Douglas, chair of the CMH board of directors, said in the release. "We’ve had the opportunity to observe Mike’s leadership within the hospital in recent years and have been impressed with his collaborative and goal-centered approach. We were impressed with Mike’s enthusiasm and vision for CMH’s continued future growth, emphasizing the constant improvement of quality for our patients. We are confident that Mike will lead CMH to continued success as we continually strive to better serve our community.”

“CMH has faced challenges during the recent pandemic, and Mike has proven to be a trusted leader in helping the organization to navigate through those challenges,” Janieca Hancock, president of the CMH Foundation board of directors, said in the release. “He has a passion for rural health care and is committed to serving our patients, residents, employees, medical staff, volunteers and communities. We are eager for CMH and CMH Foundation’s future growth under Mike’s leadership.”

He previously served as administrative director of clinics for 12 years and currently serves as the chief operating officer for CMH. He’s been in that position since January 2020, the release stated.

“It will be our focus to continue providing exceptional, patient-centered care and ensuring our local communities have access to the services and health care they need,” Calhoun said. “The community has placed its trust in CMH to be there when they need us the most. We will continue building upon that trust as we improve and expand the health care services we provide.”

Calhoun earned a Bachelor of Science in business administration and a Master of Business Administration with a concentration in health care administration from Southwest Baptist University, Bolivar, per the release.

A native of Halfway, Calhoun has been a part of the Bolivar community for more than 20 years, the release stated. He served on the Bolivar Area Chamber of Commerce board of directors for three years and was president in 2015. He is an active member of the Missouri Association of Rural Health Clinics, serving as president from 2017 to 2019, and is a current board member of the National Association of Rural Health Clinics. Calhoun was a member of the Malcolm Baldrige Quality Award board of examiners in 2015, and he has also been a bi-vocational pastor of Calvary Missionary Baptist Church in Bolivar since 2007.

Calhoun and his wife, Karaley, have three children: Lincoln, 10, Mikaylen, 9, and Emeral Mae, 3, the release stated. They live on a 160-acre cattle farm north of Bolivar near Polk.

CMH was awarded the prestigious Davies Award of Excellence by the Health Information and Management Systems Society, which recognizes the innovative efforts associated with CMH’s patient electronic medical record system, per the release. CMH also was named a Most Wired Innovator and Most Wired organization and was named one of the Top 10 Rural Hospitals in America.

CMH is one of the 10 largest employers in southwest Missouri, the release stated, and is a three time Missouri Quality Award recipient (2018, 2014 and 2010), which is modeled after the coveted Malcolm Baldrige National Quality Award. 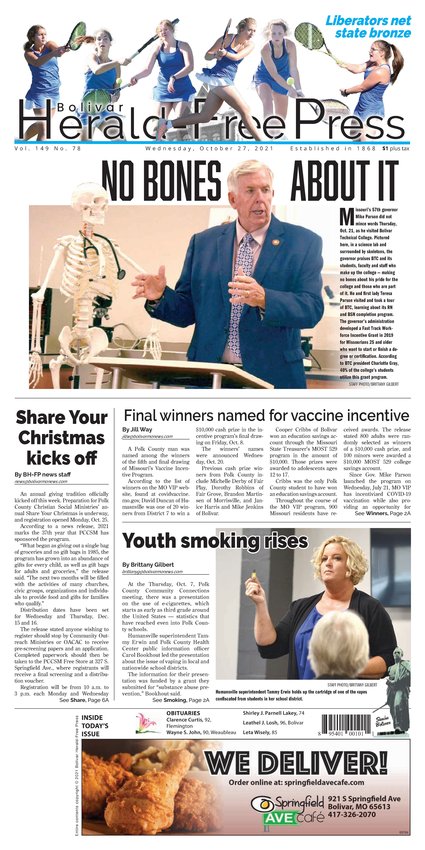 Spooky season arrives
The spookiest time of the year is upon us, and area organizations have plans in place to ghoul it up for Halloween.  The Kiwanis Club of Bolivar will host its annual costume contest at 6 p.m. …

Bolivar High School’s girls tennis team went into the state tournament Friday, Oct. 22, and came out third place winners the next day. With wins from the team’s No. 2 doubles team …

Teen injured in Sunday afternoon crash
A teenager was hurt in a two-vehicle crash in Bolivar on Sunday, Oct. 17. According to a Bolivar Police Department news release, officers were called to the area of Mo. 32 and Hartford Avenue for …

MCE competes in state sectionals
Marion C. Early High School’s softball team came up against Leeton High School Wednesday, Oct. 20, in the sectionals round of the Class 1 State Tournament. After multiple home runs for both …