Fiery but fond farewell to the White House 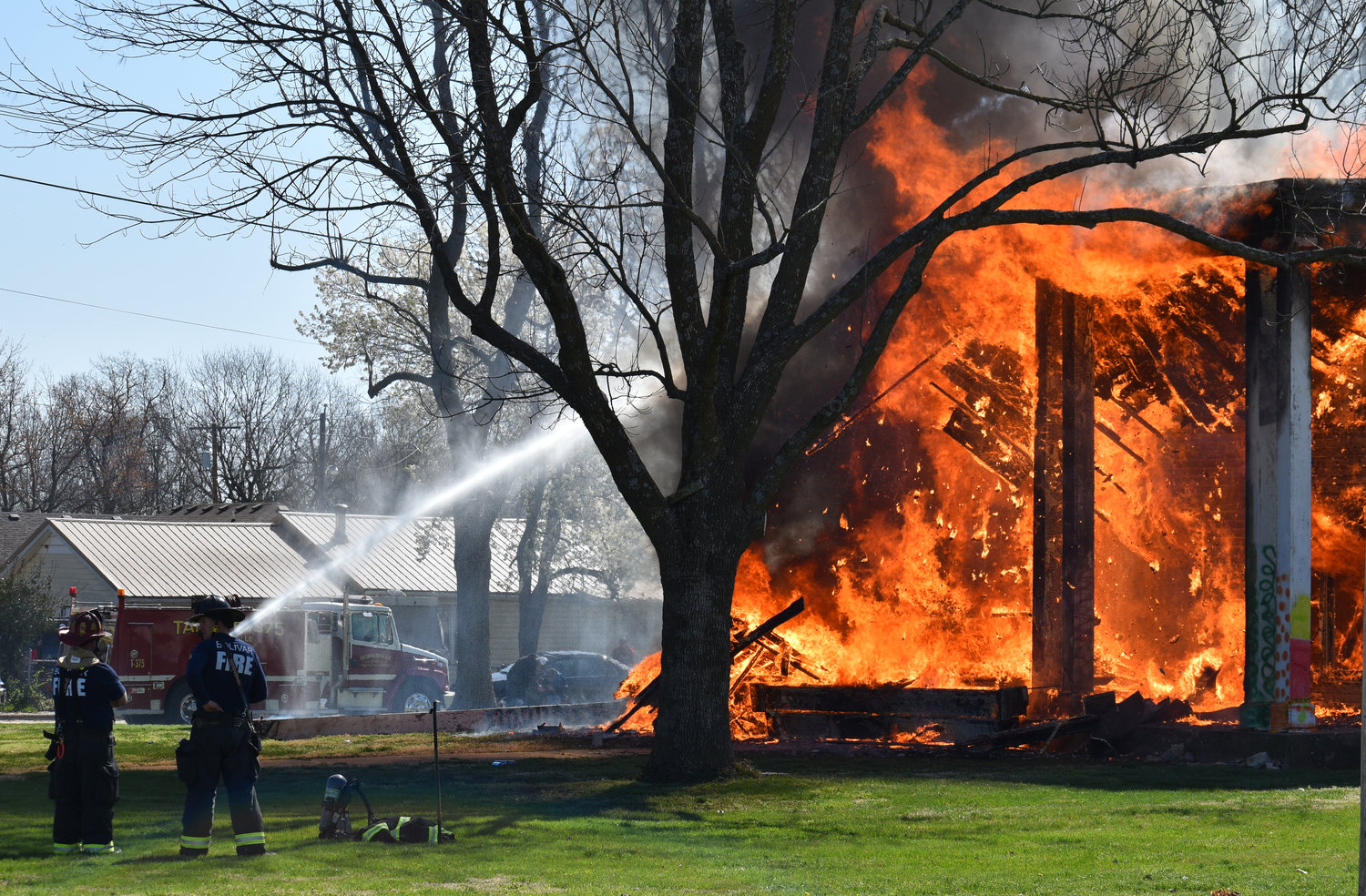 Capt. Dustin McHaffie and firefighter Caleb Dunaway spray water on the fire as the roof of the front porch begins to collapse.
STAFF PHOTO/JILL WAY 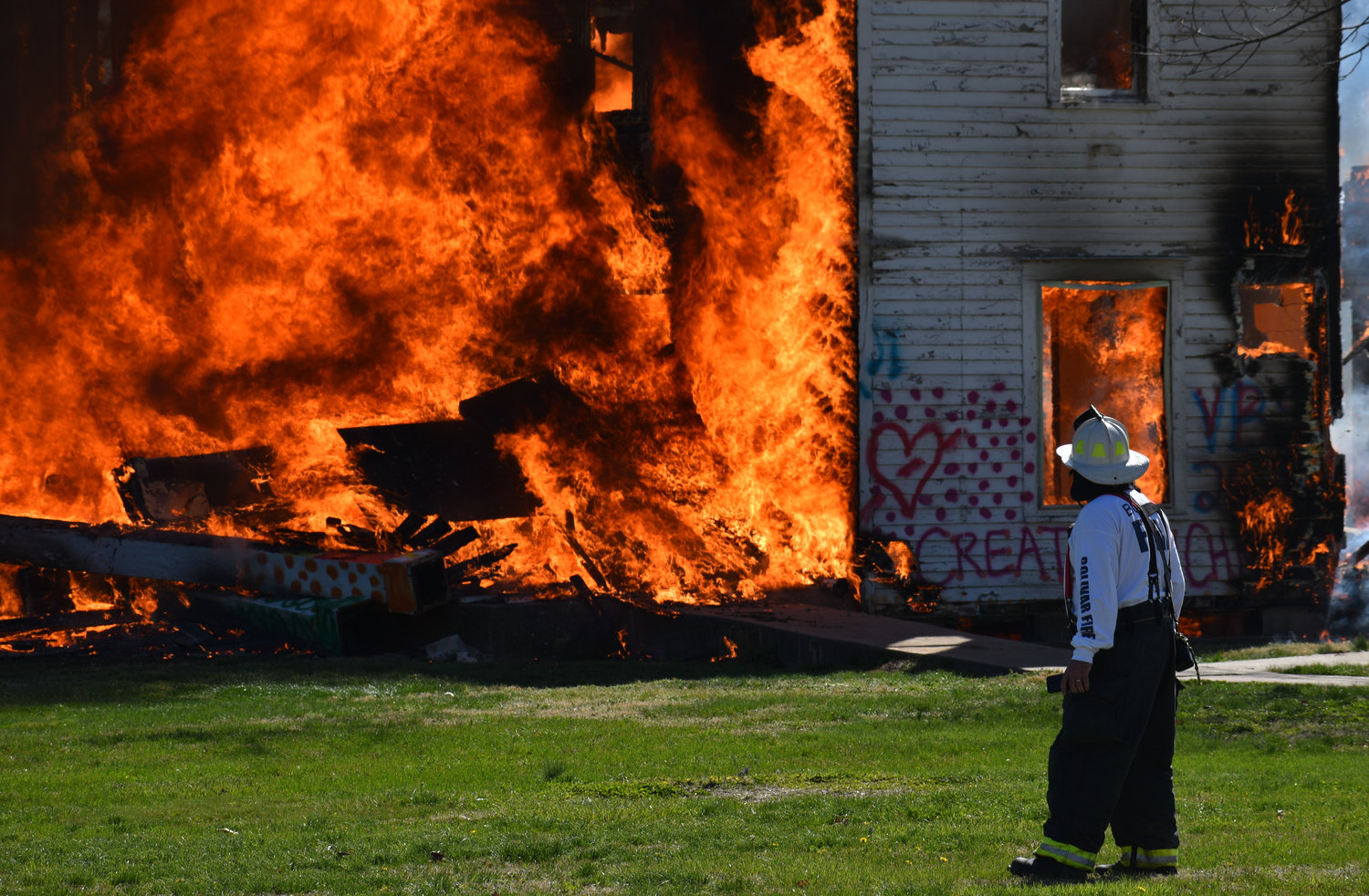 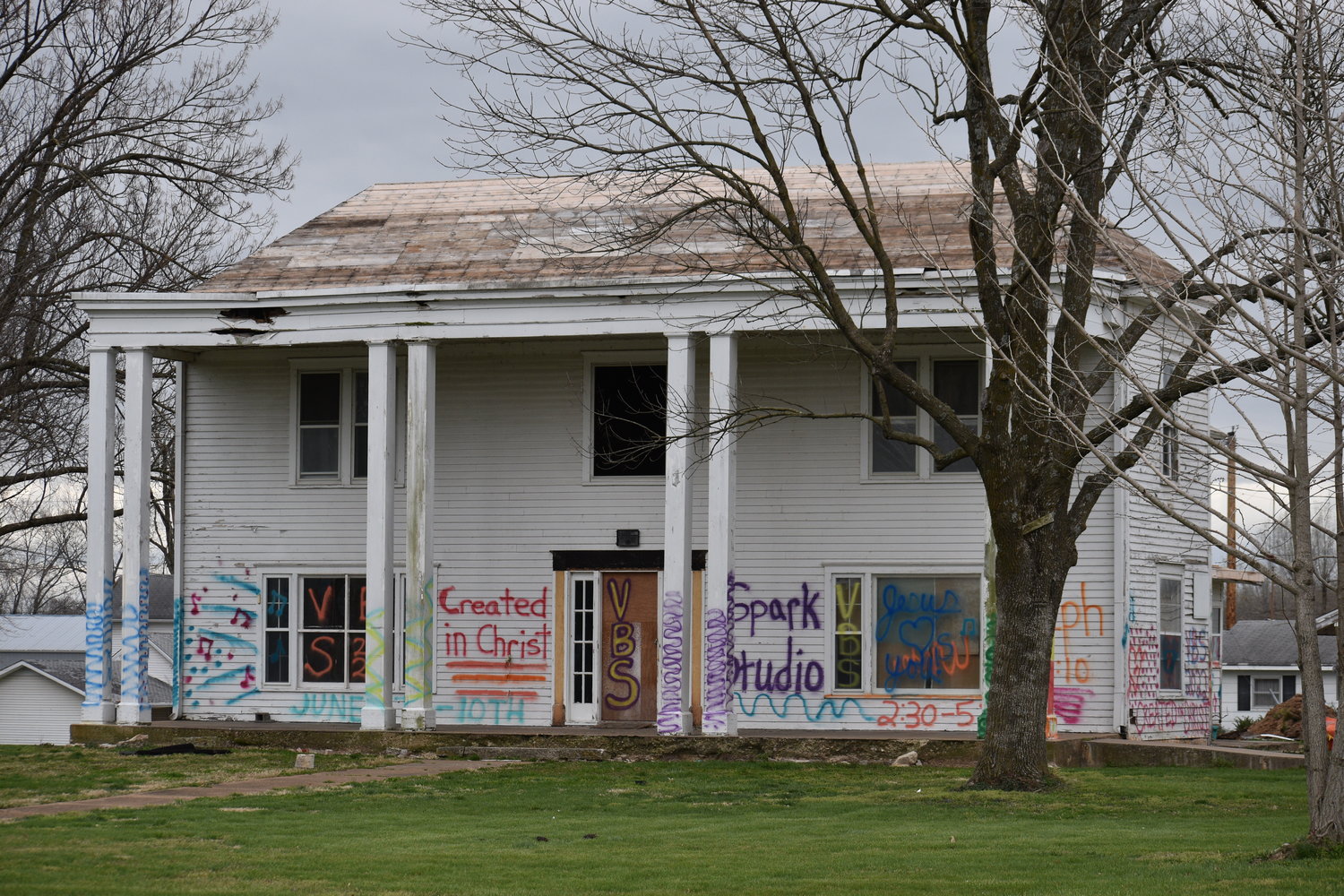 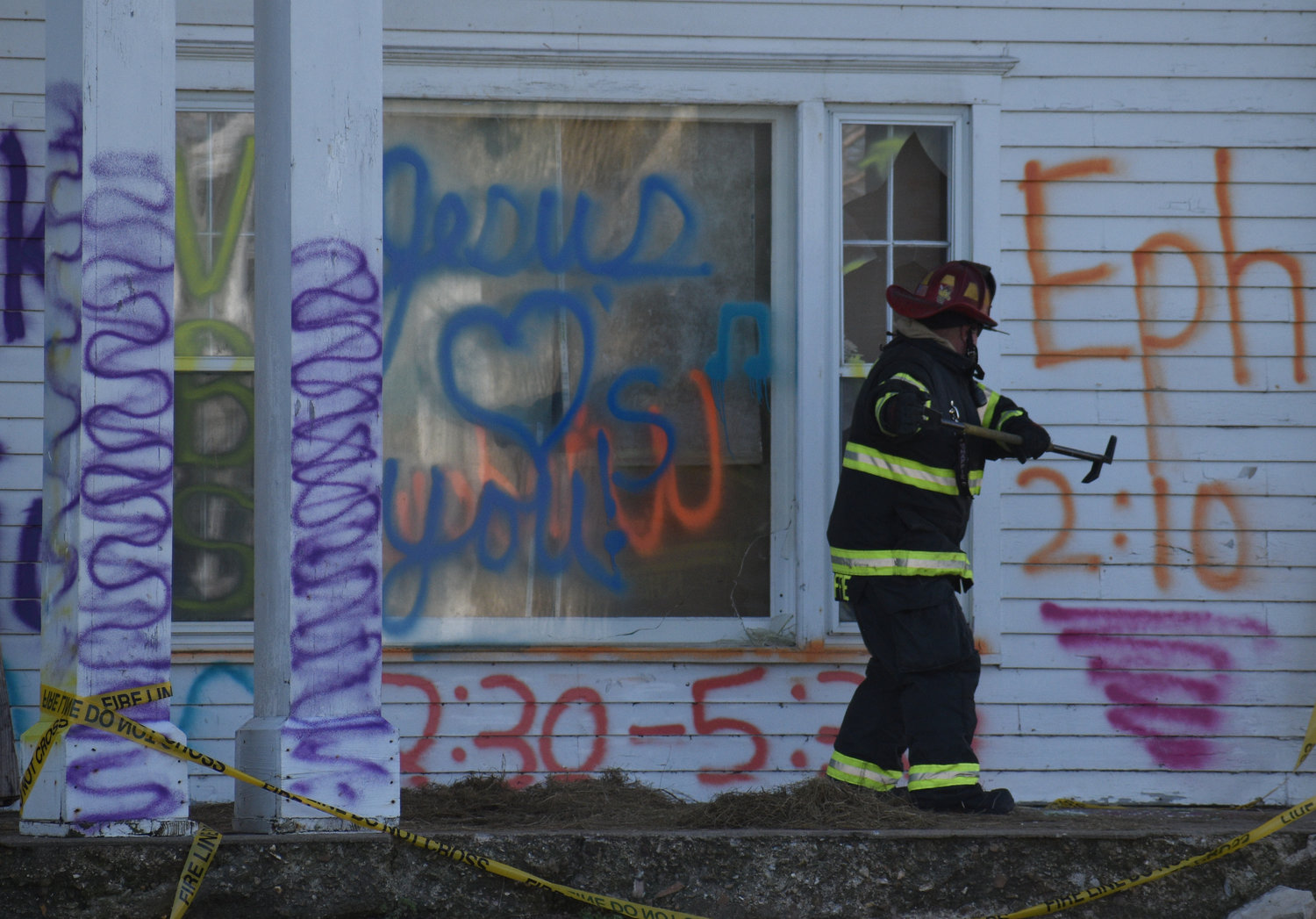 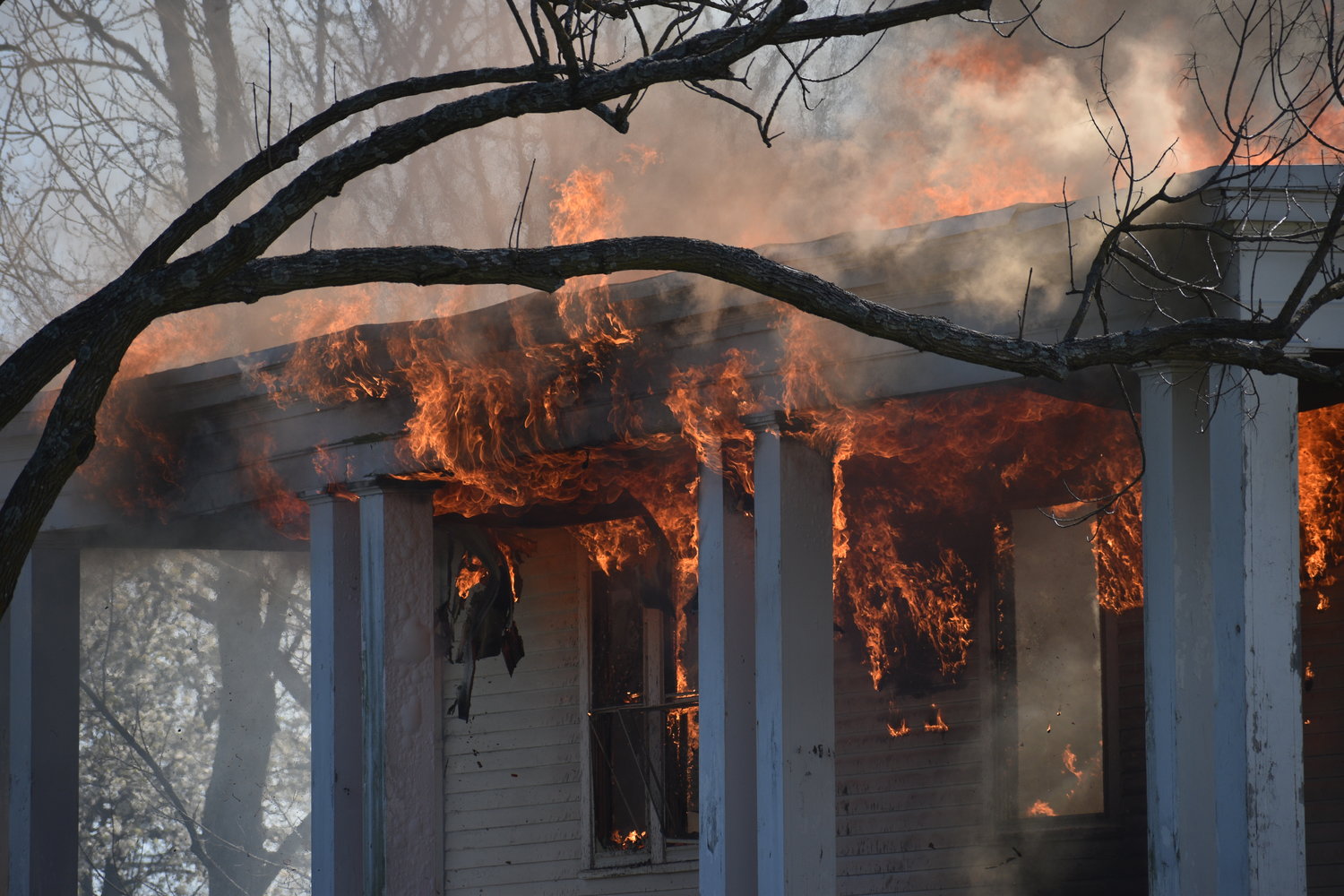 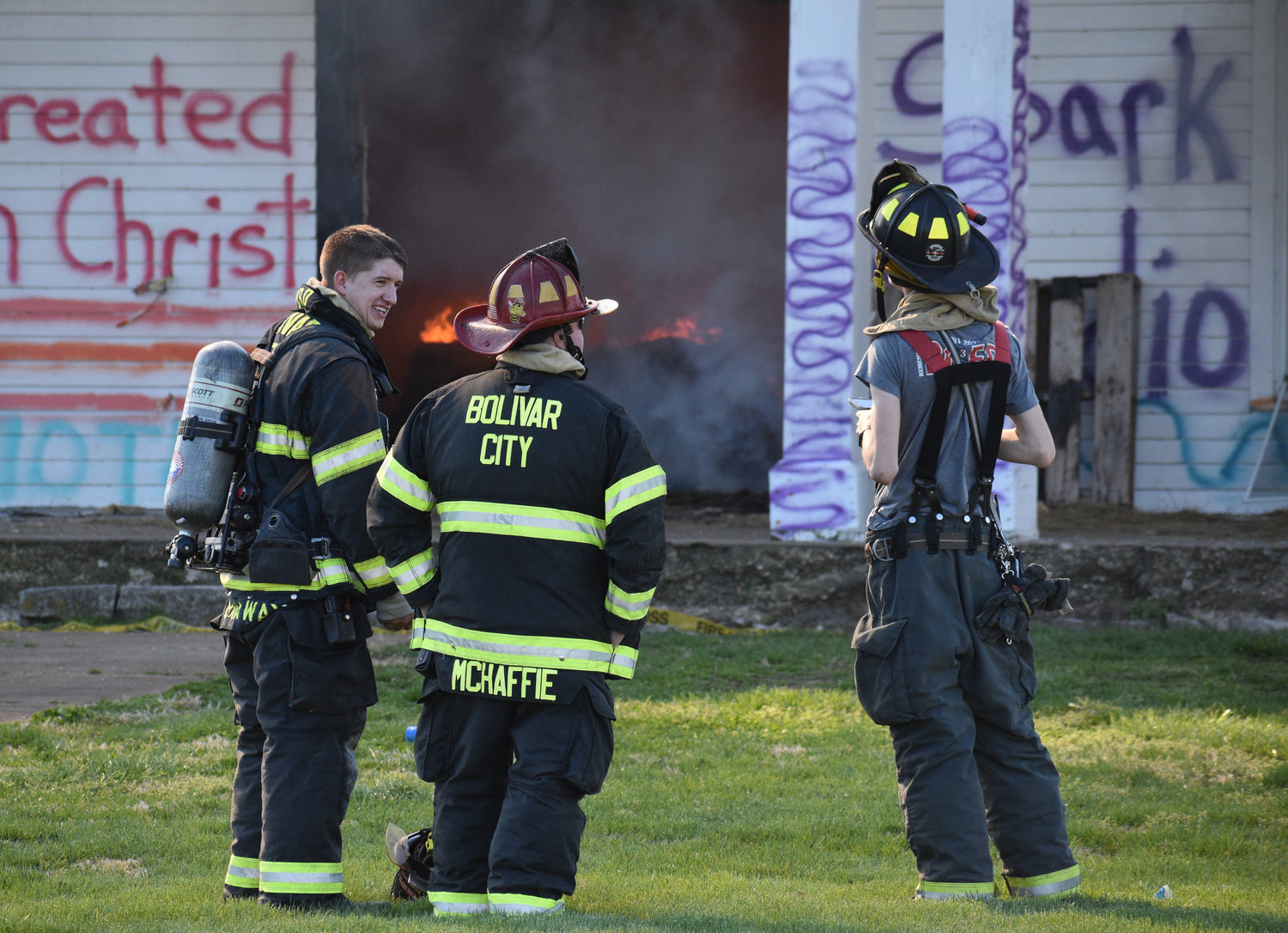 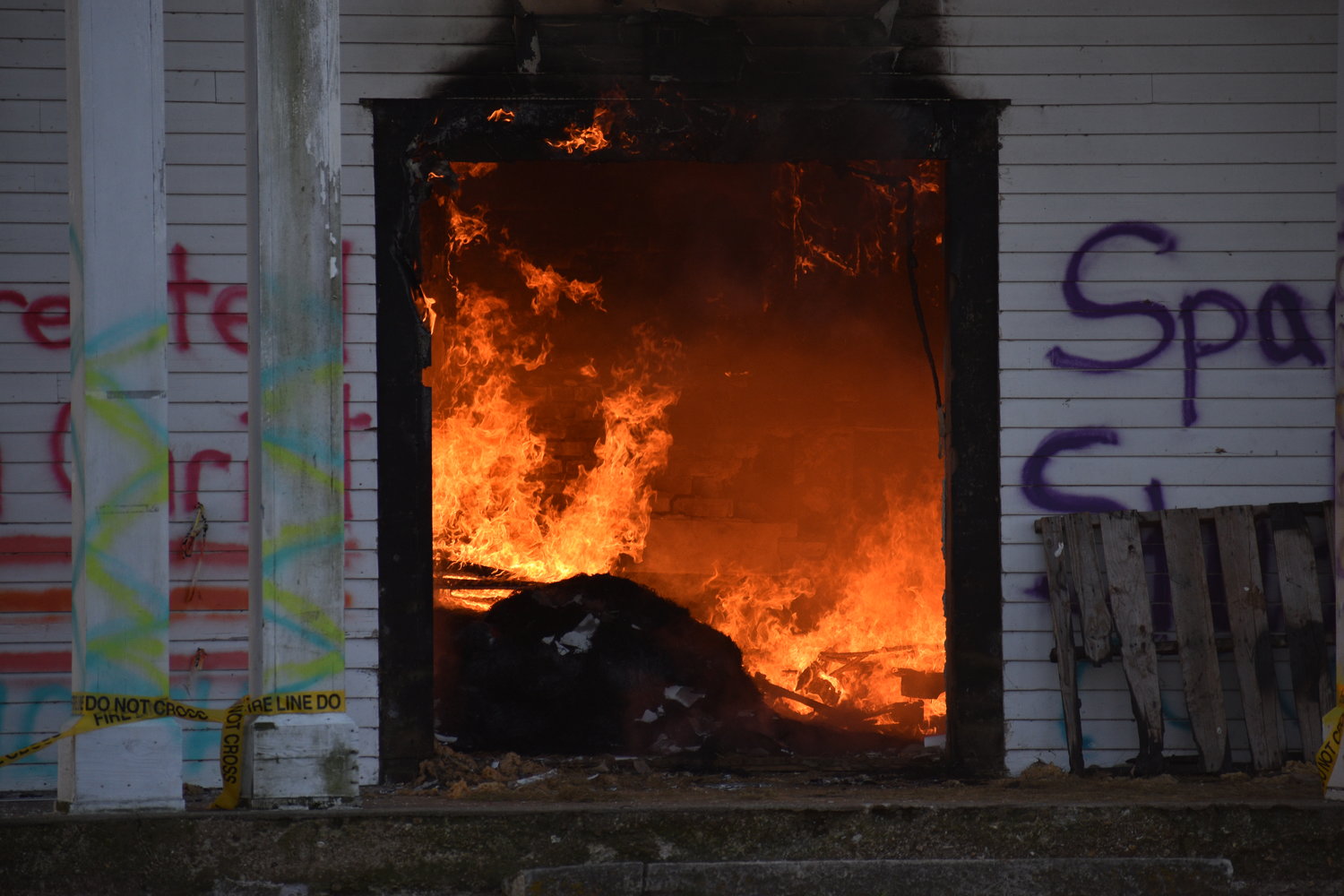 Fire and smoke appear in the doorway.
STAFF PHOTO/JILL WAY 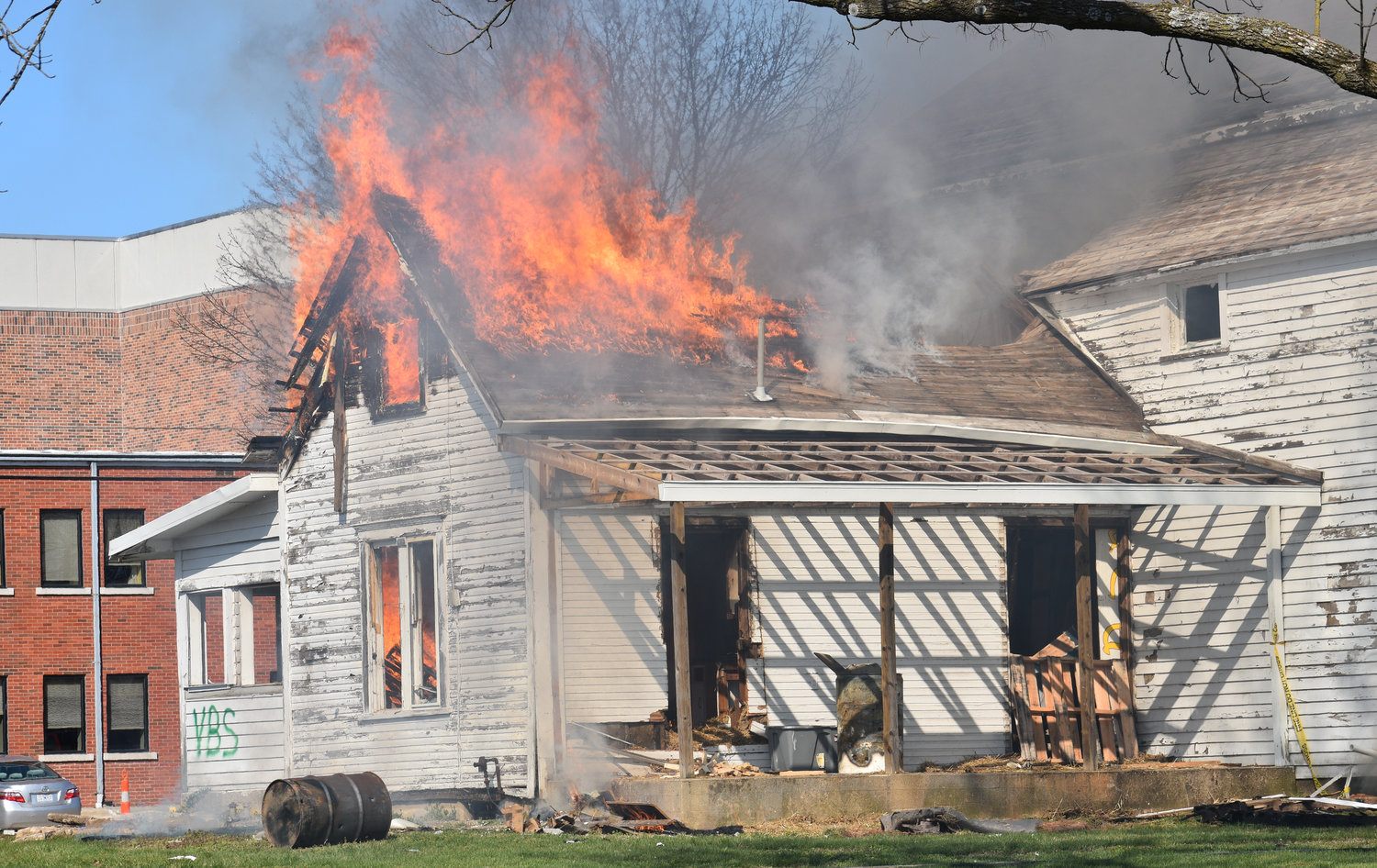 Flames shoot from the roof on the south end of the house.
STAFF PHOTO/JILL WAY 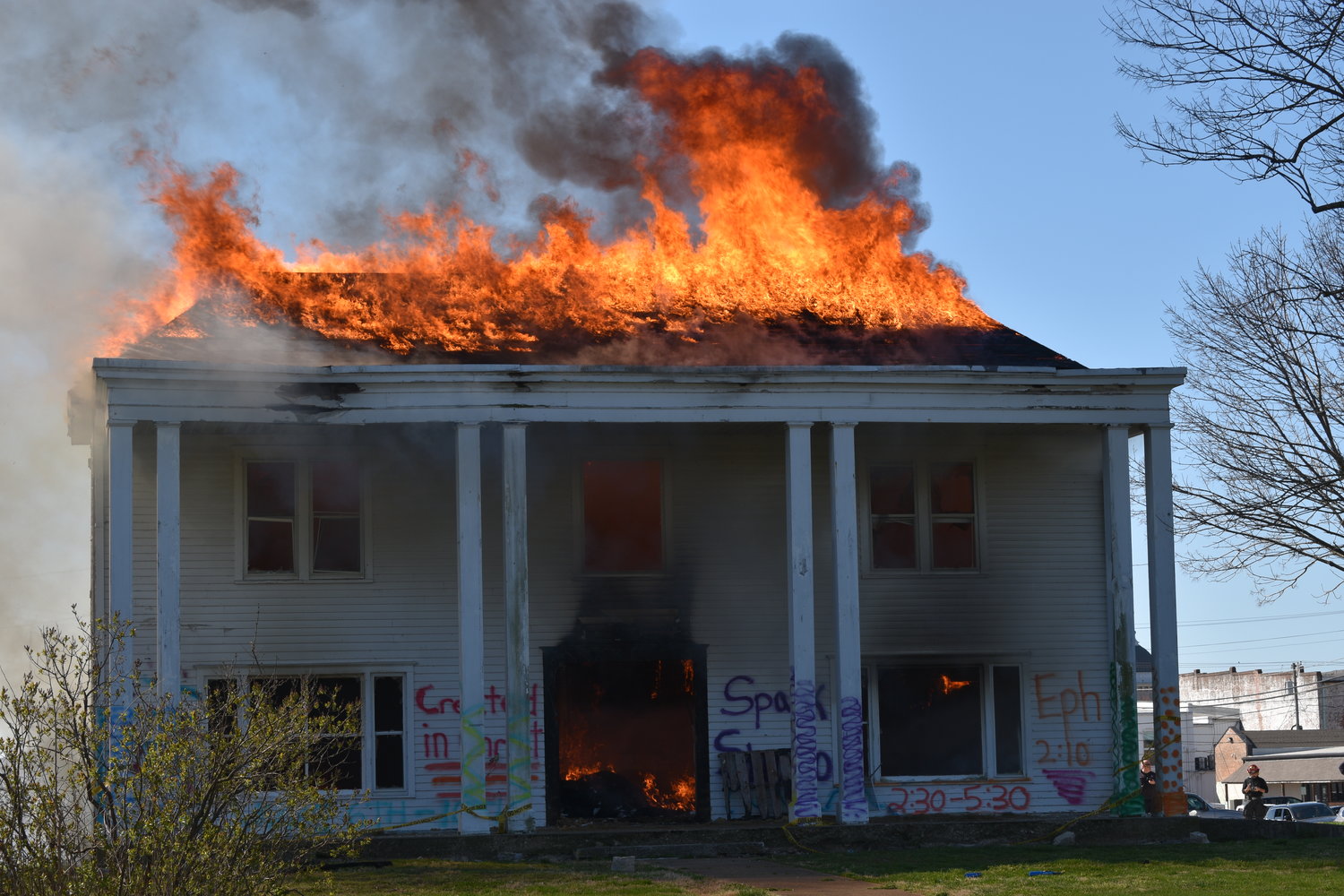 The roof of the White House is ablaze with orange flames.
STAFF PHOTO/JILL WAY 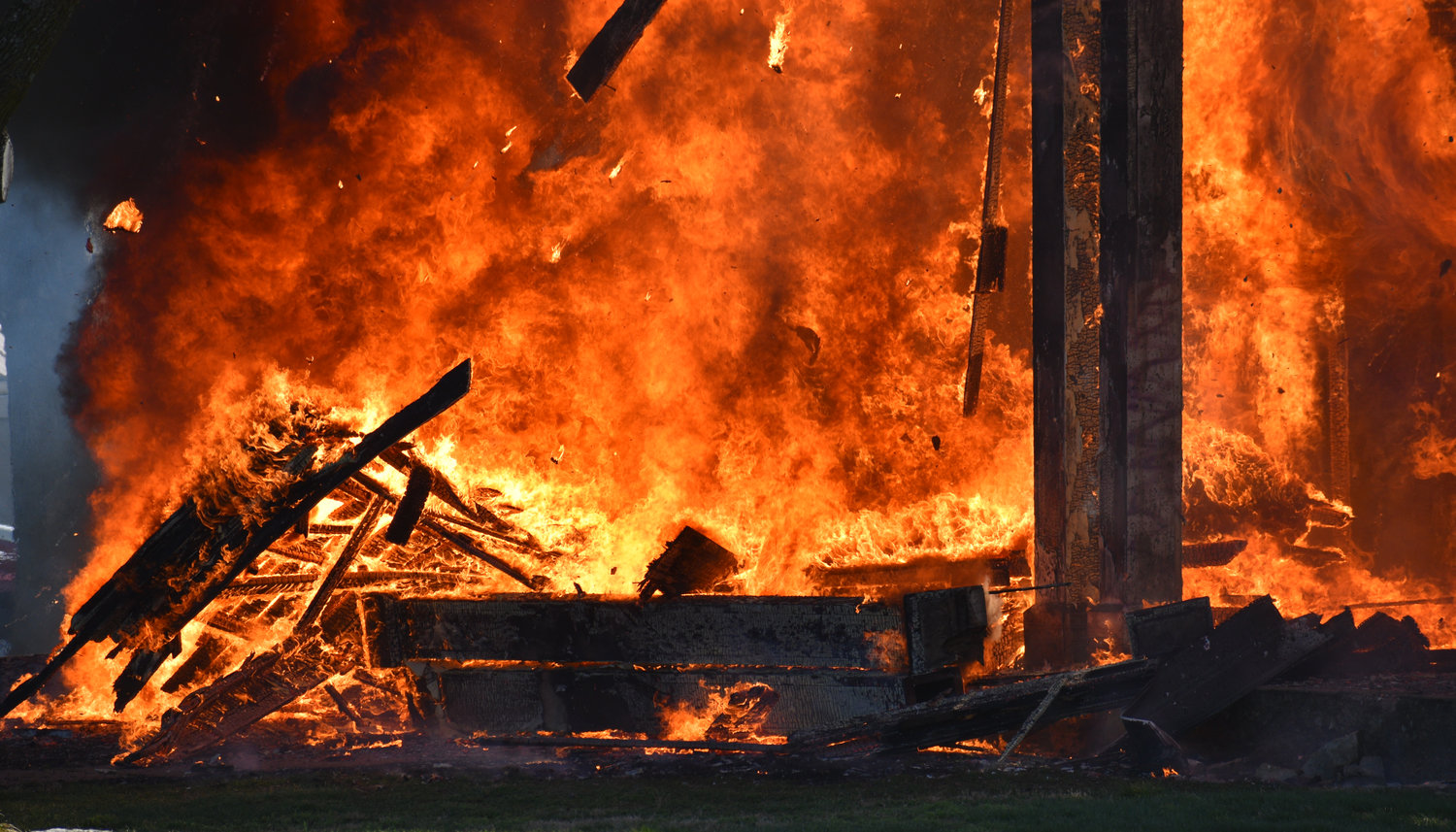 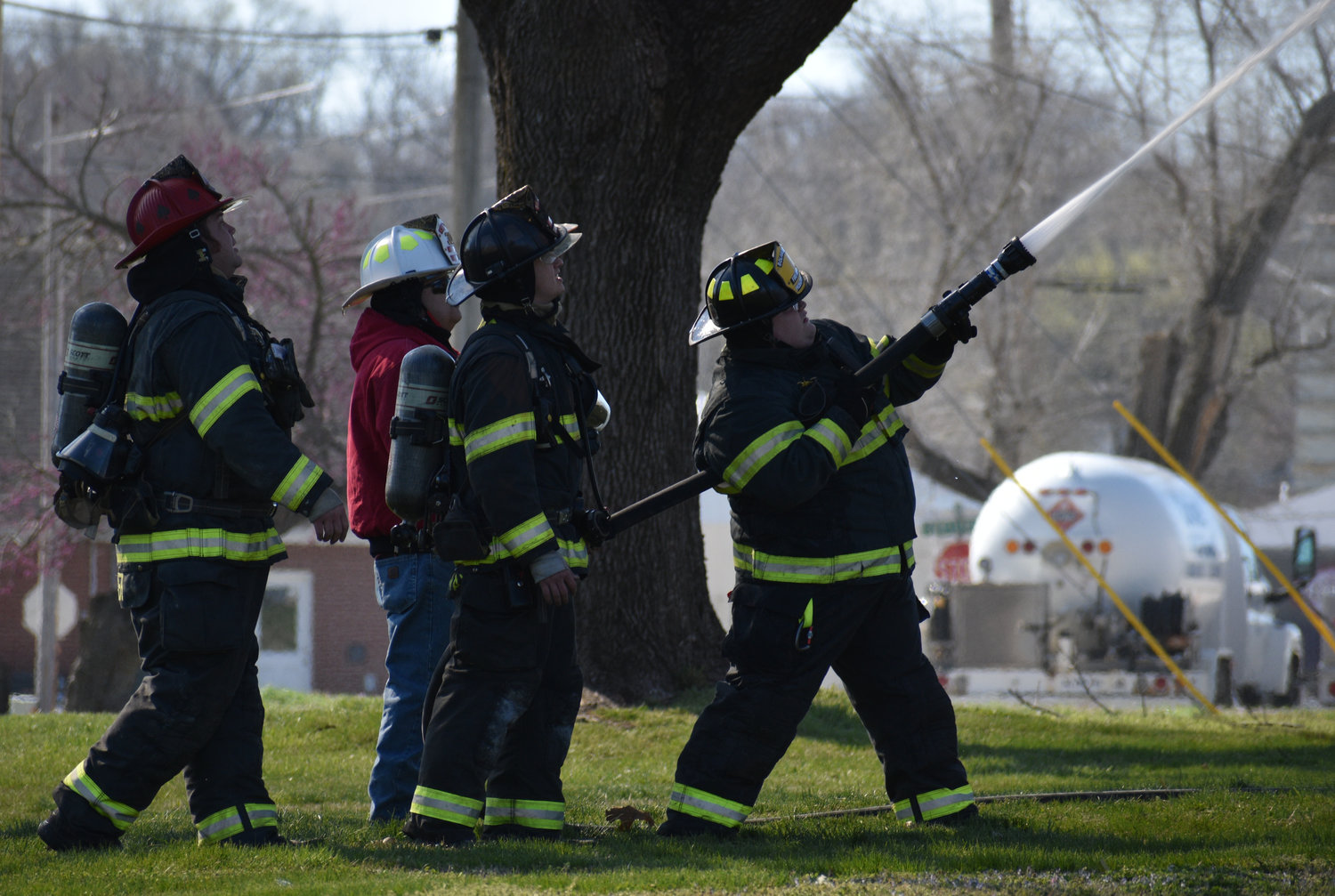 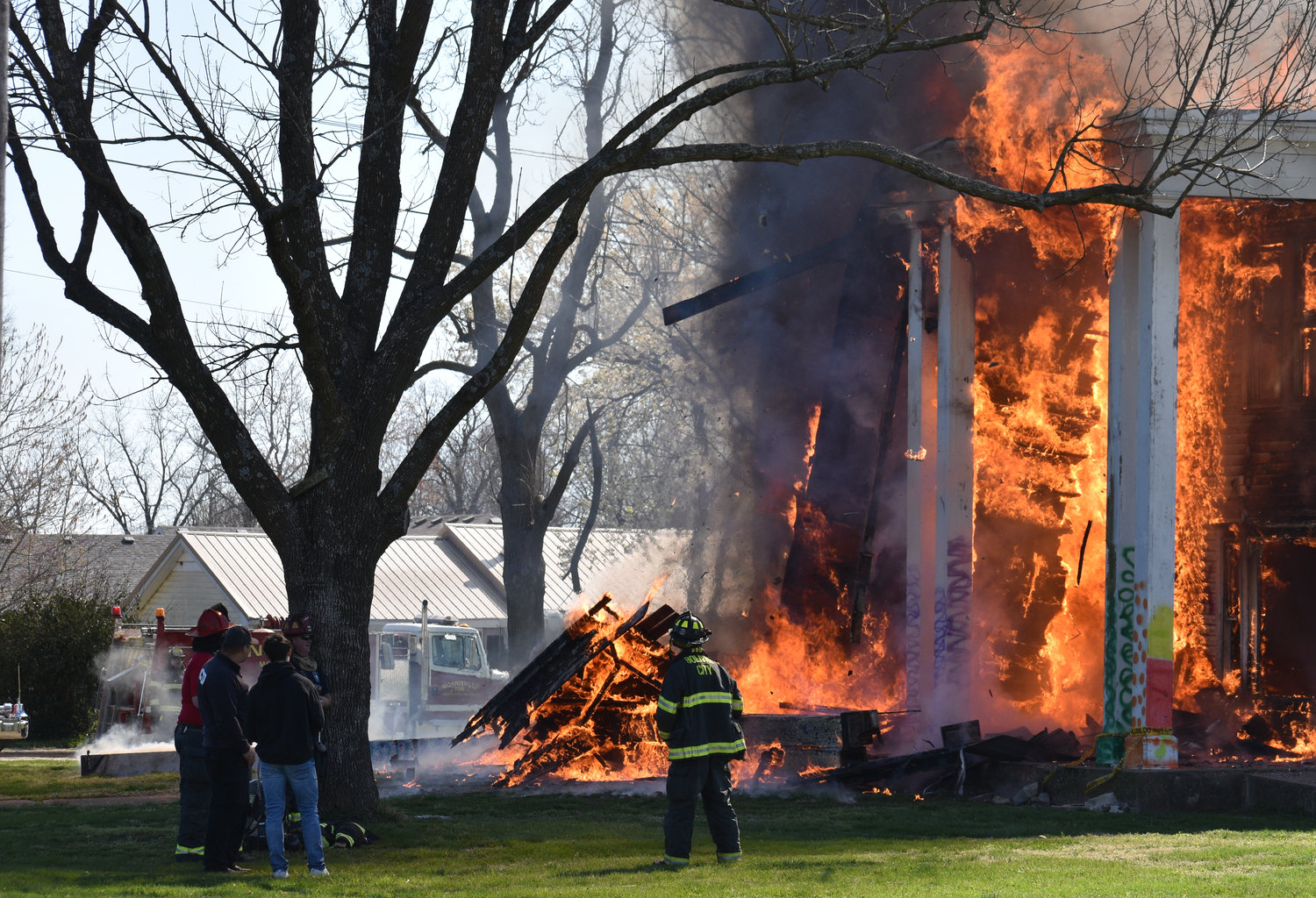 The firefighters look small compared to the backdrop of the burning house as they work the controlled burn Saturday, April 9.
STAFF PHOTO/JILL WAY A crowd gathers on the north side of the White House to watch the building burn.
STAFF PHOTO/JILL WAY The frame of the house hangs on as the fire burns.
STAFF PHOTO/JILL WAY 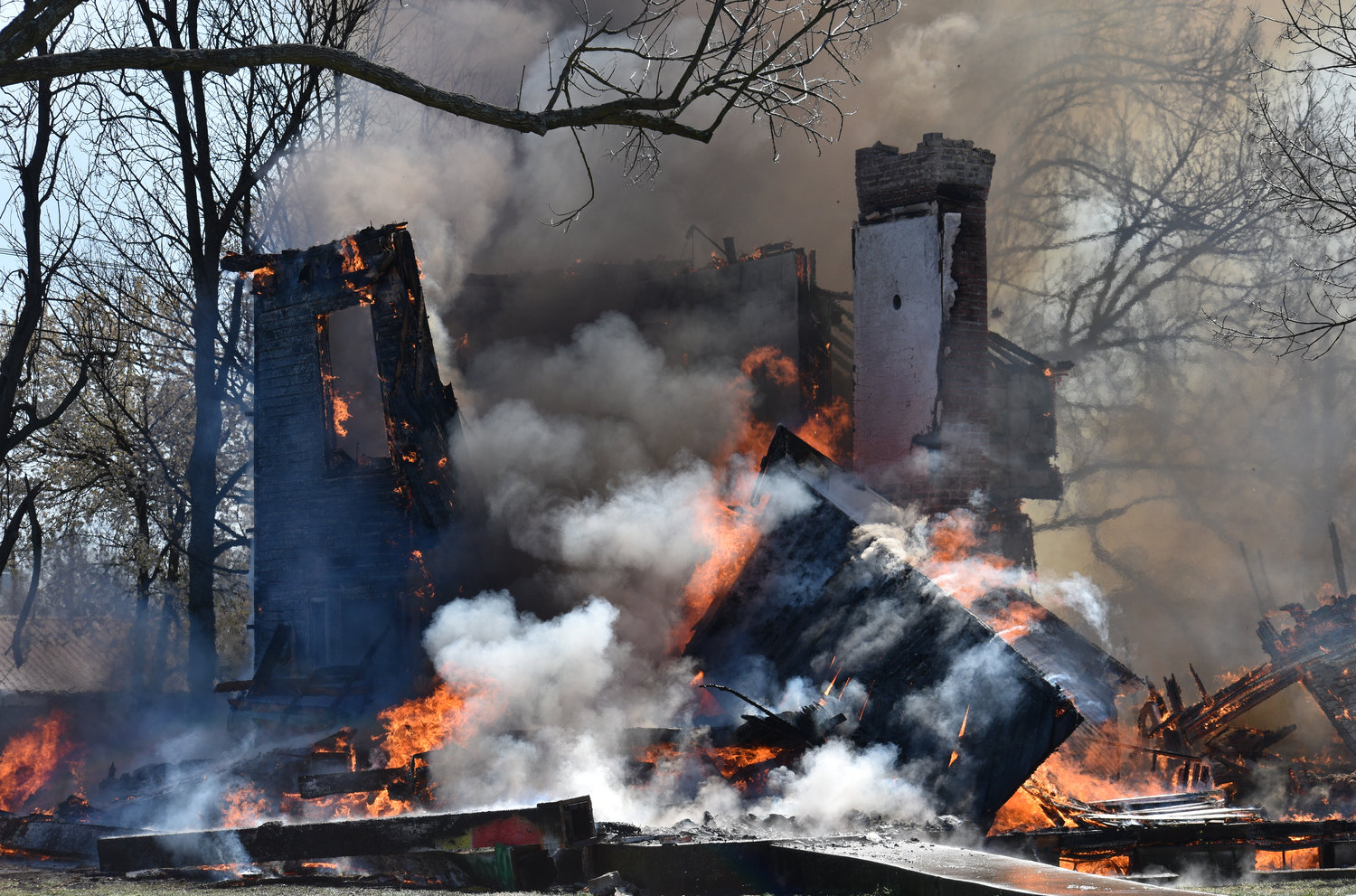 Fire and smoke billow from the house.
STAFF PHOTO/JILL WAY All that remains of the White House is billowing smoke and a chimney.
STAFF PHOTO/JILL WAY
Previous Next
Posted Wednesday, April 13, 2022 12:00 am
Upcoming ceremony

“The garage will help us respond to your emergencies more efficiently,” a social media post stated. “While here, you can also see the rest of the fire portion of the building.”

Missy Vestal with Bolivar’s First Baptist Church says the White House — the iconic two-story white home that formerly sat at the intersection of North Springfield Avenue and East Locust Street — is much like the Giving Tree.

Made famous in Shel Silverstein’s book of the same name, the Giving Tree sacrifices itself for a little boy, showing unconditional love and unmatched generosity.

“And the tree was happy," Silverstein wrote.

For years, the house, which sat directly east of the main church building, was an important gathering space for the church.

“It was used in so, so many ways,” Vestal said.

But on Saturday, April 9, the White House gave the ultimate sacrifice.

After being donated by the church, the building was demolished in a live controlled burn training for the Bolivar City Fire Department.

And as Vestal would contend — “the house was happy.”

FBC’s White House served the congregation “in many ways in the time we had it,” Vestal said.

“It was such a huge blessing,” she said. “The White House has been so important to our community because of all the ministry that has happened in and through that place. There have been lives changed, people discipled, cared for, loved on, fed and introduced to the gospel.”

Vestal said “these are the memories that have the greatest significance.”

“It’s about relationships,” she said. “We hope others think about the house in the way we do thanks to the wonderful ministry that happened there over the years.”

In recent years, Vestal said, the White House served as a space for the church’s outreach program for at-risk kids.

“We loved having a space that was more like home to help people feel comfortable,” she said.

Over the years, however, time took its toll on the White House, Vestal said.

“It got to the point it was unsafe,” she said.

She said the structure had deteriorated to the point that restoration wasn’t financially feasible for the church, and it posed a danger for those inside in the building.

Vestal said the church attempted to sell the property for several months, even for as low as $1, but no one put down an offer.

So, leaders decided the house could serve another purpose.

The church donated the White House to Bolivar’s fire department for training.

“It was simply too unsafe to use in any other way,” Vestal said.

He said they worked on a wide range of skills, from overhaul to rescue techniques.

“Everyone worked on a myriad of techniques,” Watkins said. “The kind of training you can’t replicate without a building like the White House.”

He said in the past 10 years, this is only the second time the department has had the opportunity to do a controlled burn of a house for live fire training.

“It’s a unique experience, to say the least,” Watkins said. “There are so many EPA and DNR requirements that are really hard to meet.”

To burn the White House on Saturday, April 9, firefighters set fire to hay and wood at multiple ignition points, he said. They took care to control the fire in the back of the house because the church wanted to preserve the garage on the south side of the property.

“It’s the real world, a real construction, and these are training techniques we just can’t simulate,” he said. “It was an invaluable learning experience.”

Before donating it to BCFD, First Baptist held an auction to sell all usable items from the White House to raise money for church ministries.

Vestal said people who attended the auction bought molding, doors and “basically anything of value,” so pieces of the house could live on elsewhere.

Then the week before the scheduled burn down, Vestal said leaders decided to use the building to promote the church’s upcoming summer Vacation Bible School in June.

“Even in the last week of the house’s life, it could still be used for ministry,” she said. “What a gift.”

While some on social media and in the community raised questions about the White House’s demolition and the use of spray paint on the building, Vestal noted First Baptist’s history and love of “making old things new when possible.”

In 2017, the church turned the former Long building on East Chestnut Street between North Springfield Avenue and North Main Avenue — originally a livery and stable built around 1890 and later a hardware store — into the church’s staff offices, per previous coverage.

FBC worked to maintain many elements of the original building, including the original sliding door, fixtures and wood beams.

The church has also renovated and made use of the Esquire Theater on East Chestnut, Vestal said, as well as the location the church calls the Rose Building.

The Rose Building was part of the former Roweton’s Home Center on North Springfield Avenue and is named after community pillar Rose Roweton, she said. It’s now used for the outreach ministry formerly held in the White House.

And while the White House isn’t the first property FBC owns but decided to not renovate  — others include the Quonset Hut and the Grace House — Vestal said the church doesn’t take those decisions lightly. 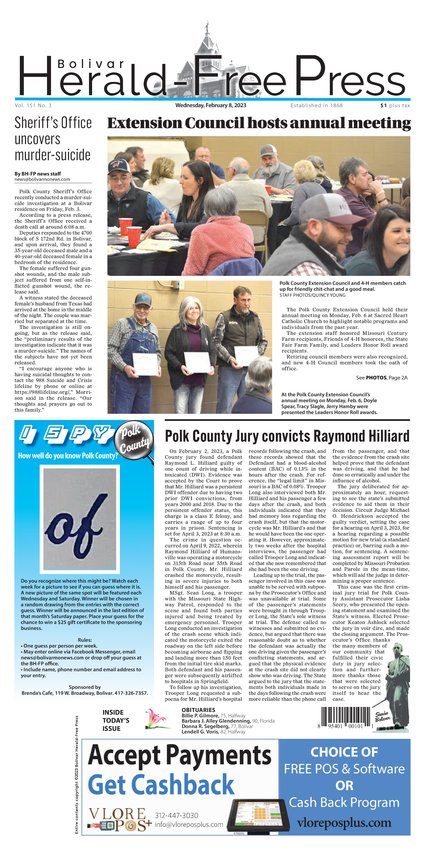