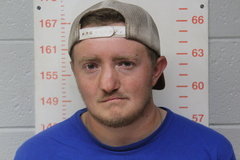 A former employee at Bolivar R-1 Schools faces felony charges for allegedly having sexual contact with a student.

According to online court records, Scott R. Bryson, 25, was arrested on Monday, Oct. 17, and charged in Polk County Circuit Court with class E felony fourth-degree child molestation involving a child less than 17 years of age when the offender is over 4 years older than the child and class E felony sexual contact with a student.

The felony indictment states that Bryson is charged with subjecting the minor to sexual contact by touching her chest multiple times this year during the months of February through April.

The class E felony charges are punishable by up to four years in prison, the indictment states.

A spokesperson of the Bolivar School District confirmed that Bryson was employed as a custodian until May 2022.

After Bryson’s employment was terminated at Bolivar Schools, the district was notified about the allegations, which were then reported to the authorities and the state hotline.

“We have no information indicating that the indictment occurred on school grounds, and the district cooperated with legal authorities as they reviewed this matter,” the spokesperson said. “Student safety is our first priority, and we will continue to ensure that any decisions or referrals follow the appropriate protocols.”