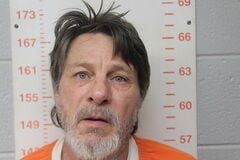 A man from Fair Play was arrested on Monday, Jan. 9 after allegedly attacking someone with a knife.

The probable cause statement said that an officer received a call in Fair Play from the victim. According to the victim’s testimony, there was an altercation between the two at Bearden’s house when Bearden began cursing at the victim and grabbed a knife off of the mantle in an attempt to stab the victim.

The victim stated that “he blocked the knife and threw Bearden onto the couch and then onto the floor,” per the statement.

When the officer went to Bearden’s house, he noticed that Bearden “had a very strong odor of intoxicants coming from his person.” The statement said the officer asked Bearden about why he was using the knife, and Bearden replied by saying, “I wanted to kill [the victim].”

The knife was seized as evidence, and the victim confirmed that it was the weapon that Bearden used during the attack.

Bearden showed that he “attempted to cause serious physical injury to a victim,” and that due to his violent tendencies, he was a threat to society, the statement said.