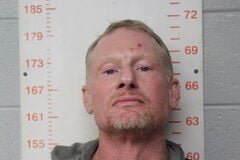 A man is now in the custody of Polk County Jail after a manhunt was conducted by The Polk County Sheriff’s Office on Monday, Dec. 19.

Law enforcement deputies responded to a house fire on South 77th Road, south of Mo. 215, in the Morrisville area. Sims, who was armed with a rifle and handgun, shot at deputies and fled from the scene into a wooded area.

On Monday morning, Polk County Sheriff Danny Morrison warned the community about Sims, who he described as “armed and dangerous.” Morrison said that officers had "set up a perimeter and were able to contain [Sims] to the area.”

After leaving the wooded area, Sims surrendered and was placed under arrest. All of his weapons were accounted for, Morrison said.

The probable cause statement said that during an interview with Sims after he had been taken into custody, Sims had reportedly stated that “he intended to burn the house down after an argument” with another person. During the incident, he “was very mad and turned on the propane bottle and opened the wood furnace in the basement,” the statement said.

Law enforcement had previously encountered Sims on four occasions for "altered mental status complaints," as the statement said, between June 24, 2022 and December 19, 2022.

The house was destroyed by the fire. No injuries from the incident were reported.