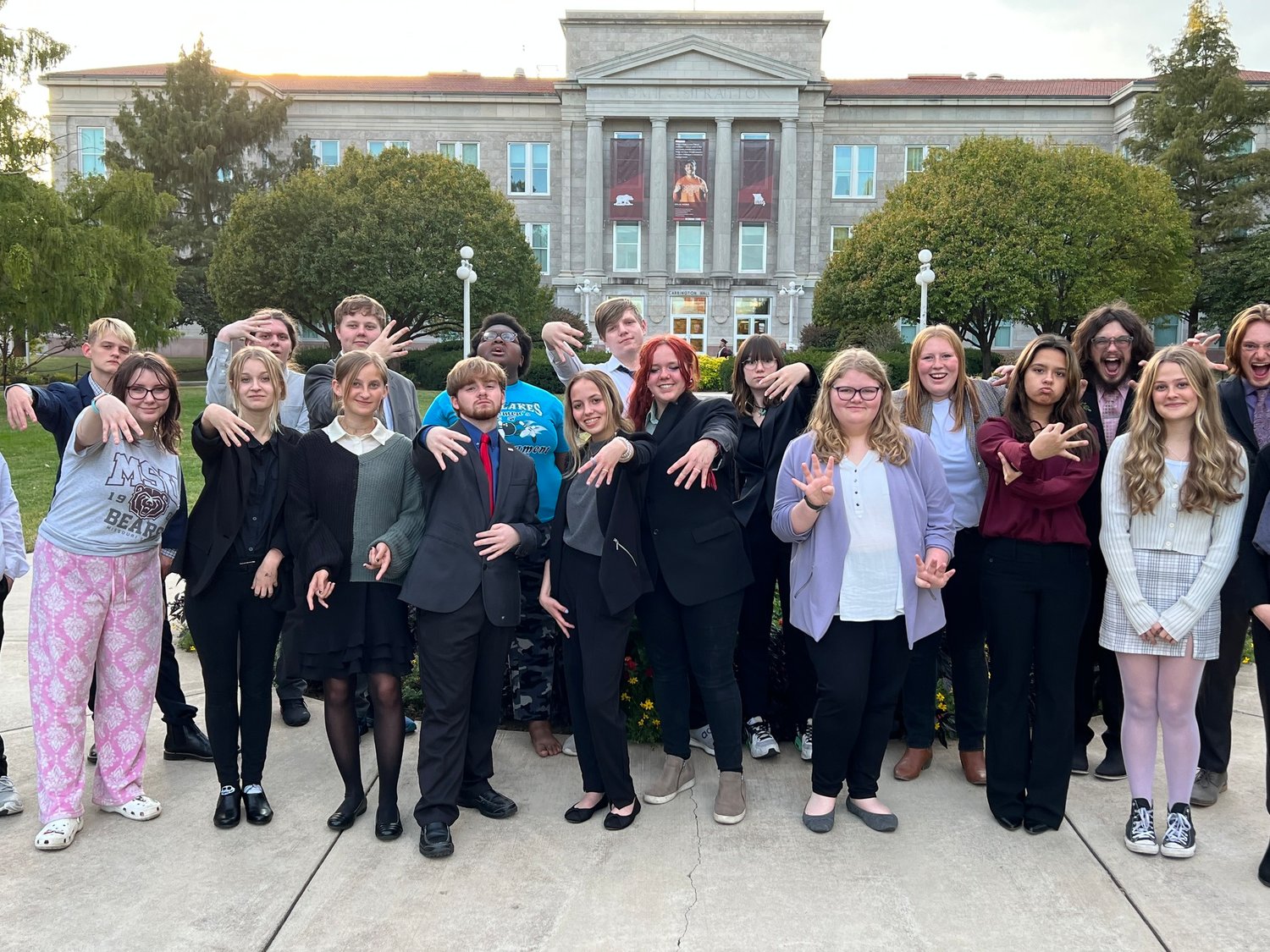 Students proudly represent their school with the number four, which was their school code at the tournament.
CONTRIBUTED PHOTO 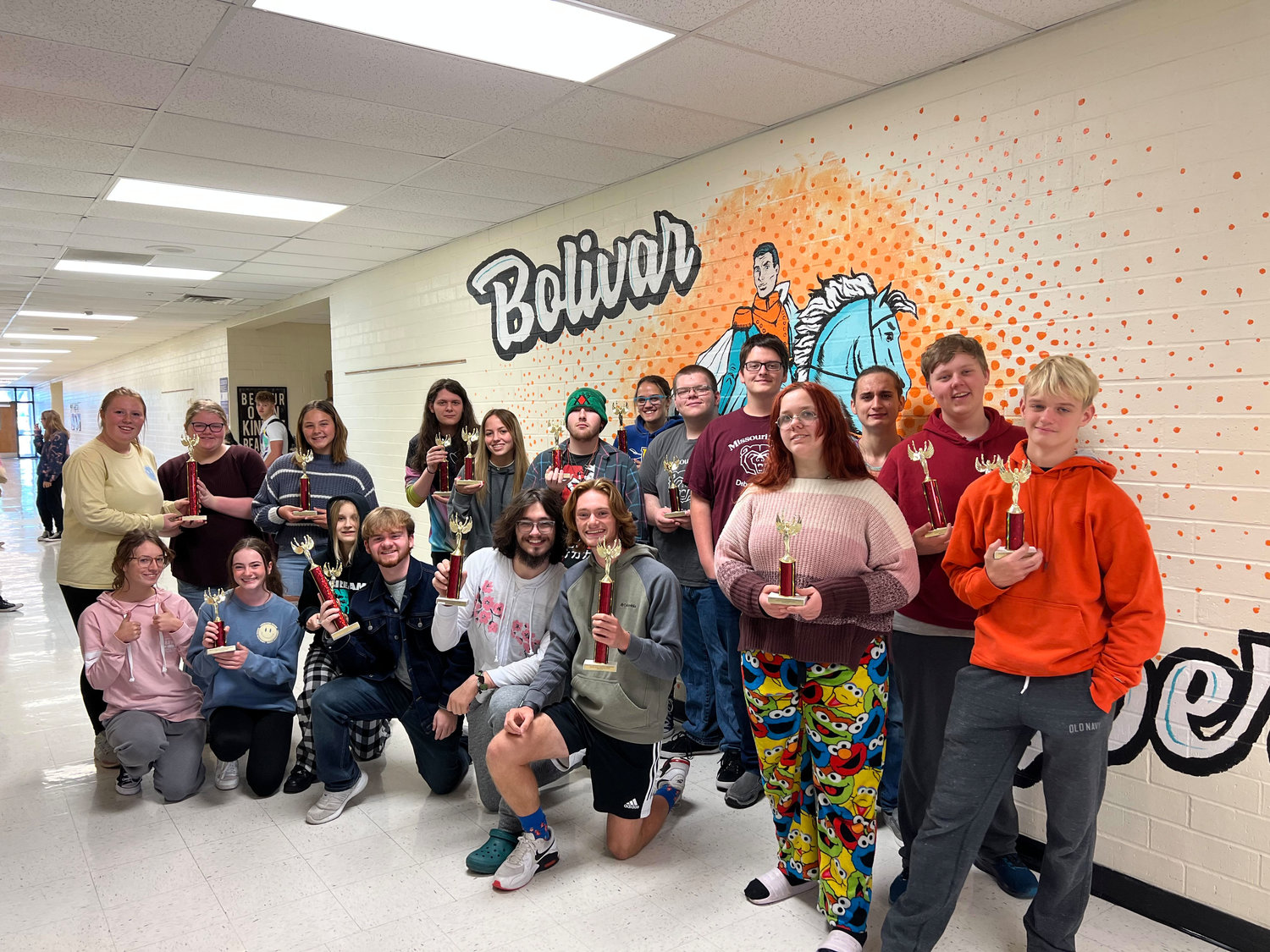 The Bolivar High School Speech and Debate team recently competed with many other students from southwest Missouri at their season-opening tournament at Missouri State University.

Competing against 22 schools, the team earned third place in both the Novice Sweepstakes and the Varsity Sweepstakes, with the team achieving second place overall in the tournament.

“This is the best sweepstakes finish for our school in several years for the season opener (nearly altogether),” stated Ethan Samuel, BHS Instructor of Speech, Debate, and Drama.

Several students also expressed many positive thoughts about the tournament. In his fourth year on the team, senior Robert Clark finished as tournament champion in Varsity Humorous Interpretation.

“The weekends are very long, but crazy fun!” Clark said. “Getting to know everyone on the team and seeing their events is awesome. There's an event for everyone and seeing their talents is really cool! As a team, we should have a very successful season this year.”

Another senior, Lacey Ashlock, is in her third year on the team. During the competition, she earned fourth place in Championship Lincoln Douglas Debate.

“Traveling to tournaments for speech and debate is always an experience like no other. It provides a sense of community that I genuinely don't believe you can find anywhere else,” Ashlock explains. “If just competing wasn't enough, knowing that you've succeeded with your debate family is somehow even better. There is nothing else I would rather spend my time
doing.”

While many seasoned team members earned top marks in their categories, many underclassmen in their first year on the team also delivered successful performances.

“At first I was really scared for the tournament, and I didn't think I'd do very well. However, it ended up being a really fun experience with my teammates, and it was a lot easier than I thought it would be. If you're thinking about joining speech and debate, I definitely recommend doing
it!” Billingslea encouraged.

Many students agreed that the tournament was a great start to the year, and that they are looking forward to future competitions.

“It was so much fun getting to see all our hard work pay off at the first tournament! It was so much fun! I can’t wait to see what our team will do this year!” said freshman Hannah Watkins.

During the tournament, Watkins placed third in Novice Humorous Interpretation.

According to the BHS speech and debate instructor, the team held a 50% or higher win rate in 80% of their debate entries in the preliminaries. A promising start to the season, Samuel says the team ended the tournament with 16 trophies from debate events and 10 trophies from individual events.

“The first tournament of the season is one of my absolute favorites. It is a place where you watch students discover how truly capable they are. Students are forced to think and problem-solve on the fly. Mr. Winckler and I are incredibly proud so many of these students have found a love for
the activity in this team!” stated Samuel.

Many other students earned top rankings at the tournament. For a full list of these students, visit bolivarschools.org.